Airsoft Holographic Sight – Everything You Need to Know

You’re out on the battlefield, and you’ve spotted the enemy. You take the aim and fire. Whether or not you made the shot has a lot to do with your abilities, but also the kinds of accessories that you’re using.

Here, we are going to explore such an accessory that you could consider using to enhance your target hitting abilities.

Airsoft’s success how to do with how well you hit your target, as it means that your team gets on the winning side, and your opponents have to do a lot more to keep up.

What is holographic sight?

You’re out on the battlefield, and you’ve spotted the enemy. You take the aim and fire. The odds that you made or didn’t make the shot has a lot to do with your abilities, but it also has to do with the types of accessories that you’re using.

What is a Holographic Sight?

Holographic diffraction sight as it is often called is mainly a non-magnifying gunsight. The shooter looks through the optical window, that’s made of glass, and it allows them to see a holographic reticle image within their field of view regardless of the distance.

The gadget works by using a laser transmission hologram of the reticle which reaches the shooter’s eyes via a number of lenses. The mechanism is quite complex and requires a pretty potent laser aspect.

One of the reasons why people opt for it is because they are fairly accurate, especially compared to the commonly used red dot.

What Does a Holographic Sight Do?

Well, in a nutshell, the job of the holographic sight is to enhance a shooter’s shooting accuracy. Accuracy is improved by widening the peripheral vision, which in turn means greater control, and that means they can find and hit a target dead centre faster.

When you have a laser beam guiding your shot, there is very little that can go wrong. Also, the various reticle patterns can be tailored to what you’re trying to achieve, which further improves your shooting accuracy.

Now while it may sound complex because it is, a holographic sight gives you depth information about the target. The way it does this is by reconstructing light that’s reflected from a 3D object, i.e. your enemy.

When you combine all three features of holographic sight, it isn’t a mystery how it makes you a better shooter. Furthermore, when you want to change your perspective, simply move your head.

What is the Difference Between Holographic Sight and Red Dot Sight?

You will often hear the term ‘red dot sight.’ While it is not a completely different type of sight but instead it is a term that’s used to refer to a sight that has more magnification power.

Interestingly, laser dot slights also have an illuminated reticle. Now the three red dot sight categories are prism scopes with tubes that have a dot reticle and will reflect light from an LED. The other one uses reflex slights. There are no tubes here but instead, have the red dot for the reticle. The reflex signs don’t have an LED but reflect light from the lens. If anything these are the best sights for pistols, rifles and shotguns.

The final type is also called a holographic sight; these are rare. These sights are mainly made by EOTech, which has the patent to the technology. Some of the sights will have similar branding, but they are not the real deal, so buyer beware.

Now there is only one other brand that uses a similar holographic sight system is Vortex. What makes them different is that the reticle they use is suspended between two sheets of glass. They work by highlighting the reticle instead of reflecting light. You’ll find that these types of holographic sights are often paired with numerous tactical weapons.

Holographic sights are something many people prefer because they have a much larger red dot which improves accuracy tremendously.

Why Consider Getting A Holographic Sight?

Practice shooting for long enough, and you’ll certainly become a better airsoft shooter. In time you will become the team member that everyone wants on their side. However, you can be just as good with far less practice when you have holographic sight.

The red dot that you use makes it far easier to angle your shot, making it much harder to miss the target. Subsequent shots are also going to be on point.

Using it is easy, all you need is to put a red dot on our opponent and shoot. You don’t need the skill or have to spend time aligning the shot from the rear or the front irons to line it up perfectly.

Wherever you put the red dot, there is where the pallet will land. That’s why there is no need for you to be a pro to enjoy using holographic sight. Interestingly, your eyes will thank you for it too because you don’t have to stare down the sights for a long time.

What to consider when choosing a holographic sight 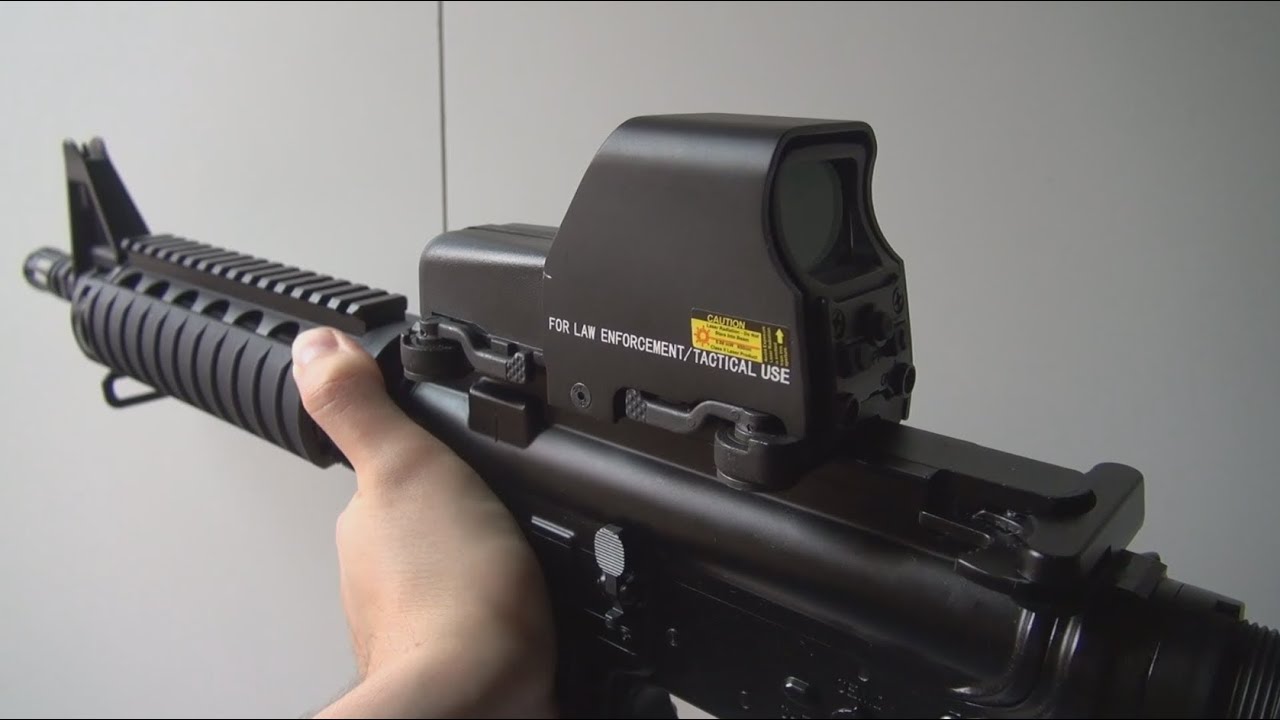 Now choosing the right holographic sight will mainly depend on a couple of variables. Everyone is unique in the way they use their airsoft guns and how they aim. That’s why what might work best for you might not work for the other person.

We mentioned EOTech a brand that makes holographic sights, and are the only ones that use their own patented technology. Not only does the brand have the knowledge to build some of the best holographic sights out there, but they are also fairly well priced. So, if you are looking for quality, then this is the brand you’ll most likely decide to buy.

Interestingly we are a few other brands that you might want to also check out. One is Vortex which we’ve already discussed, but there is also Trijicon which is a budget-friendly brand. Some other brands include Holosun, Sightmark, and Sig Sauer.

Some brands are more budget-friendly something you’ll also want to consider if you’re on a tight budget. Now they aren’t anything less in terms of performance, but compromises are still made to cut the price. However, you can still get the job done with them.

Below we’ll examine a couple of EOTech sights worth considering. 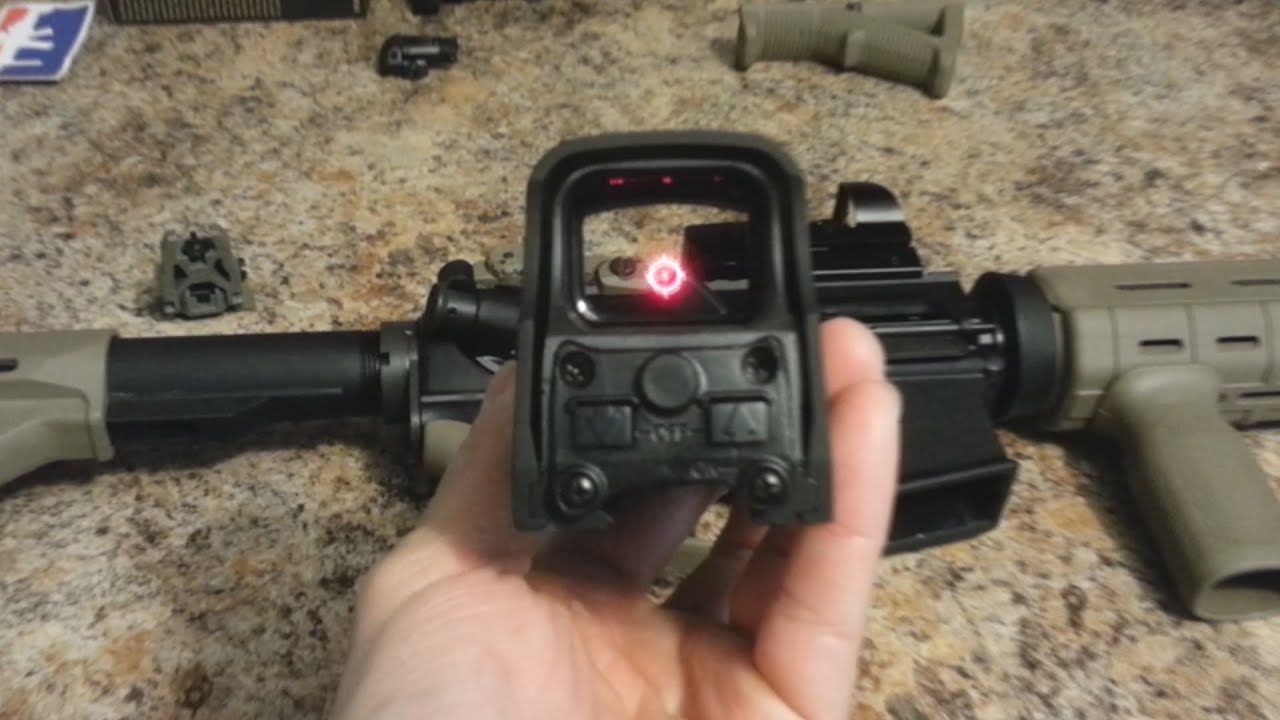 Now there are a few things that everyone likes about holographic sights such as:

The reticle is visible only to the shooter and through the sight window. However, there is also the option for the image being 3D or 2D, which enhances the shot.

Now with a holographic sight magnification is not necessary. Furthermore, their excellent build quality and comparatively good battery life mean that they will be your partner in crime for a long time to come.

In our experience and those of many airsoft players it is one of those accessories that once you buy it, you use it for a very long time. Sure, there are new models of holographic sights that come out every few years with exotic features like night mode, but overall, the technology remains the same. The other good thing about holographic sights is that they don’t leave a light signature so your opponent with night-vision goggles will not be able to find you because of it.

Drawbacks of Using a Holographic Sight

Now we’ve covered all the reasons why holographic sights are fantastic in everything from shooting on the airsoft battlefield to hunting, but it does have its drawbacks. While it is the preferred sight, especially over technologies like red dot sights, they are also slightly more expensive.

Apart from the technology being complex and often hard to manufacture, it is also a very small industry with just a handful of manufacturers. That means it can also be pretty hard to find.

Holographic sights are also pretty large and can be comparatively cumbersome to carry around. While they can only be used on a rifle, they still have to be mounted.

Also, because these sights have a built-in laser, they have a shorter battery life compared to LED sights which are also slightly cheaper. The laser diodes do have their advantages, but the drawback is that they consume a great deal of energy. For instance, with regular sights, you can get around a hundred hours from a single battery back, but with holographic sights, you will get far less than that. So, you always want to have an extra battery back on hand.

Speaking of batteries, you need to get batteries that are made for that particular sight. So, not all or regular type batteries are compatible.

Airsoft accessories are a dime a dozen; it appears as though there are new accessories hitting the market each year. However, holographic sights are fast becoming one of those ‘must-have’ accessories for people who want to take that perfect shot and not have to practice so much for it.

Anyone who is new to airsoft and wants to get the best they can will find that Airsoft holographic sights are an excellent investment. The only thing you need to watch out for is to buy the right sights for your gun. You will also want to buy sights from a trusted brand, one of which we’ve talked about above.