Empire Mini GS Review – How Small Is Too Small on The Field?

Empire has produced a wide variety of paintball markers over the years despite it being one of the youngest manufacturers in the industry. The Empire Mini GS marker is an upgrade from the Empire Mini 1.0 version which received much acclaim from the paintball community.

However, like what happens with many other products, users discovered various flaws with it, which motivates the manufacturer to come up with an improved version which in this case is the  Mini GS. The manufacturer has addressed all or at least most of the issues with the earlier version like ASA, feed neck and grips. The upgraded version is, fortunately, better than the last.

The new fine-tuned version is suitable for both beginner and intermediate players alike. Advanced players are advised to get a better, more superior gun. However, its competitive pricing may make it popular amongst users who are looking for convenience and quality without having to spend a fortune.

The term ‘mini’ has been added to the name because of its relatively smaller size as compared to regular markers. This makes it ideal for kids and adults, although some adults feel that it is too small for them.

What To Expect From The Empire Mini GS?

Now let’s start with its basic operation, the marketer, for the most part, feels like a premium product but at a budget-friendly price. However, users will need to undertake some preparation, and it takes some practice to get the hang of it. Thankfully, it does not take a great deal of time to understand and start using the Airsoft weapon.

The setup process is fairly basic, and only requires configuring the LED indicators to a style that’s best suited to you. If anything, it takes under 10 minutes to complete. The 12-inch aluminium barrel is comparatively small, so it is like using a lightweight gun.

Users of average build and height should be able to easily tuck it in for a balanced and steady shooting experience. It is arguably the ideal gun for people who don’t like weapons that make a loud cracking sound each time they pull the trigger. If anything, it is one of the quietest weapons with all that people hear is a thumping sound which isn’t distracting or disorienting for the shooter.

The other thing many people, especially children, will like about the Empire Mini GS, is the low recoil. The backward movement of the weapon when the trigger is pulled is an inch which is next to nothing so, it is a gun that can easily be handled by anyone.

While Empire Mini GS like most other guns, will feel comfortable if it is held the right way, the lightweight and short recoil make it a more comfortable weapon.  That said it is still essential to use the right technique so that the barrel does not rise.

If your feet are firmly on the ground, you will end up with a fast, smooth and steady shot. However, unlike many other models, this one has a built-in shockwave board. Furthermore, there are several firing modes like burst, tournament modes and semi-automatic.

The rubber grips around the gun make them comfortable to hold in the hands. Also, the use of rubber ensures that the gun does not slip when your hands get sweaty. Using the 45/4500 HPA tank you can fire about 100,000 paintballs before you have to refill the tank again.

One of the things that most people will instantly notice about Empire Mini GS is its compact design. The company has made sure that every non-essential inch of the gun has been removed so what we end up with is a super-compact airsoft weapon.

The removal of all excess parts means that the gun weighs a hair under 2lbs. The maximum rate of fire is 23 balls a second. While you may not be allowed to shoot at this rate at a tournament, it is still good to have.

Shooters can choose from a couple of different firing modes like PSP, three-shot, semi-automatic, millennium, ramping and fully automatic. Furthermore, the gun is powered by a 9-volt battery.

We’ll go into some of the key features of the Empire Mini GS below.

One of the things that you will like about the marker is that it does not require much practice. At 275 FPS, it has one of the highest firing rates in the budget Airsoft weapon industry. Once you get the hang of how the gun works, you can easily fire paintballs at 293 FPS with no issue. Furthermore, the velocity can just as easily be modified with a regular Allen wrench tool.

Almost all parts of the Empire Mini GS marker is made from quality material. The material, for the most part, is durable and especially the aluminum frame, which is also lightweight. So, not only will the marker last through many intense battles but will perform reliably.

We loved the rubber grip because it makes holding the gun easy. Like most other devices with a rubber grip, it improves handling comfort, especially if you are going to fire it at a high velocity.

The rubber grips also have much better durability compared to other grips we’ve used and seen in the past. In our opinion, it is one of the best things that the company has done for the marker.

We have probably mentioned this quite a few times, but the Empire Mini GS is remarkably easy to use gun, which is easy to learn how to operate. It is small enough for just about anyone to grip firmly.

The grip, as mentioned above, makes it easier for people with smaller hands or those with sweaty palms to grip reliably compared to the original Empire Mini. The strong rubber foregrip ensures that you are able to maintain a strong grip throughout your time.

The rubber wraparound is also easily removable, which makes accessing the battery easier. Even after your hands are sweaty, the grippy rubber surface ensures that it will not slip out. The deep grooves allow for users to easily rest their fingers on each one. So, even if the fingers don’t fit as they should, they still offer superior comfort.

The thick wraparound also ensures that the gun’s metallic parts are protected from the elements which incidentally are easy to replace if they wear out.  Furthermore, the Empire Mini GS offers superior performance and efficiency regardless of whether you are right or left-handed. All of which makes it a much more versatile airsoft marker. 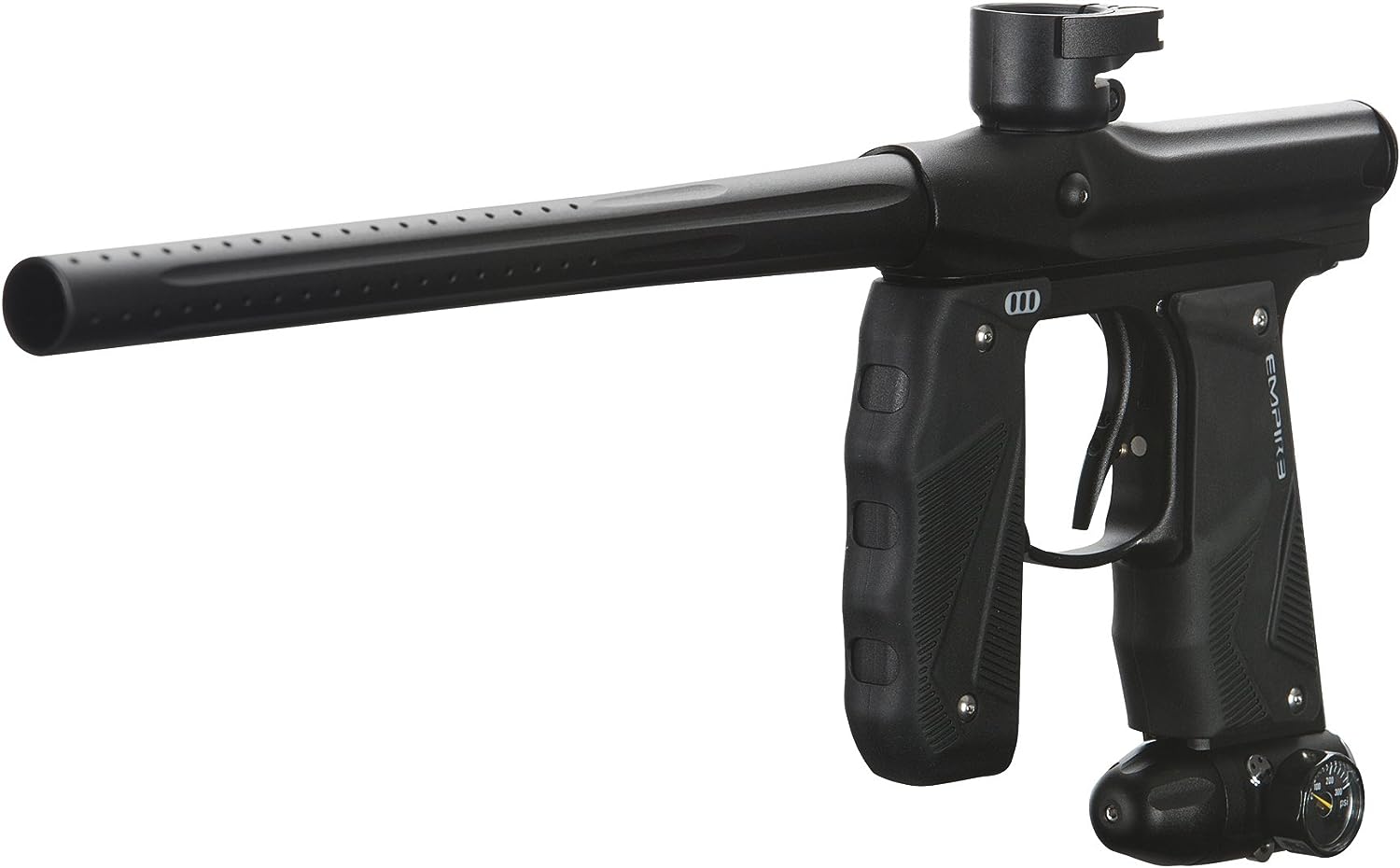 Many people who have used the Empire Mini GS will notice the micro-switch trigger, which results in the so-called ‘click’ sound each time the trigger is pulled. The objective of this switch is to familiarize people with the gun as it allows them to feel each shot. It helps keep your timing in check too. The result is more accurate shooting, and you will progressively get better.

It is one of the most appreciated and perhaps even anticipated features of the Mini GS. While the predecessor didn’t have this feature, it was one of the drawbacks that many enthusiasts pointed out.

The other issue with the predecessor was that attaching and removing the tank would take a while. The on/off ASA switch makes it easier for users to deal with thread issues, making removals seamless and attaching tanks quicker. If you have practiced long enough, you will not have to stop the game and replace the tank.

Releasing air from the tank is also now very easy. The Mini GS uses a feature that’s only available with the company’s Empire Vanquishes series of guns. We appreciate the fact that the company has added a premium feature on a budget gun like the Mini GS.

However, we’ve been hearing that some users are finding it difficult to flip the ASA switch when the tank is attached. Though the switch works perfectly, you need to push it harder than most people expect.

Now, like everything else, the Empire Mini GS will require maintenance, and so it is a crucial part of ownership. Maintaining the gun will determine consistency, reliability, and accuracy in the field.

In our limited time with the Mini GS, we reckon that it does take some time to master the right maintenance techniques. While there is certainly a learning curve, you shouldn’t pull it part just yet. You will want to read the users’ manual, and familiarize yourself with all the tiny parts, bolts, and barrels.

If you are unable to figure out how to assemble the gun, you might end up with something that does not, or it could even hurt you. Fortunately, for all users, there is no shortage of YouTube videos that detail the right assembly and disassembling process. So, take the time to learn before you take the gun apart.

Like most other things in life, once you have taken the gun apart a couple of times, it will become second nature. The good news is that no special equipment is needed, beyond just 2 hex wrenches which work with all the screws. 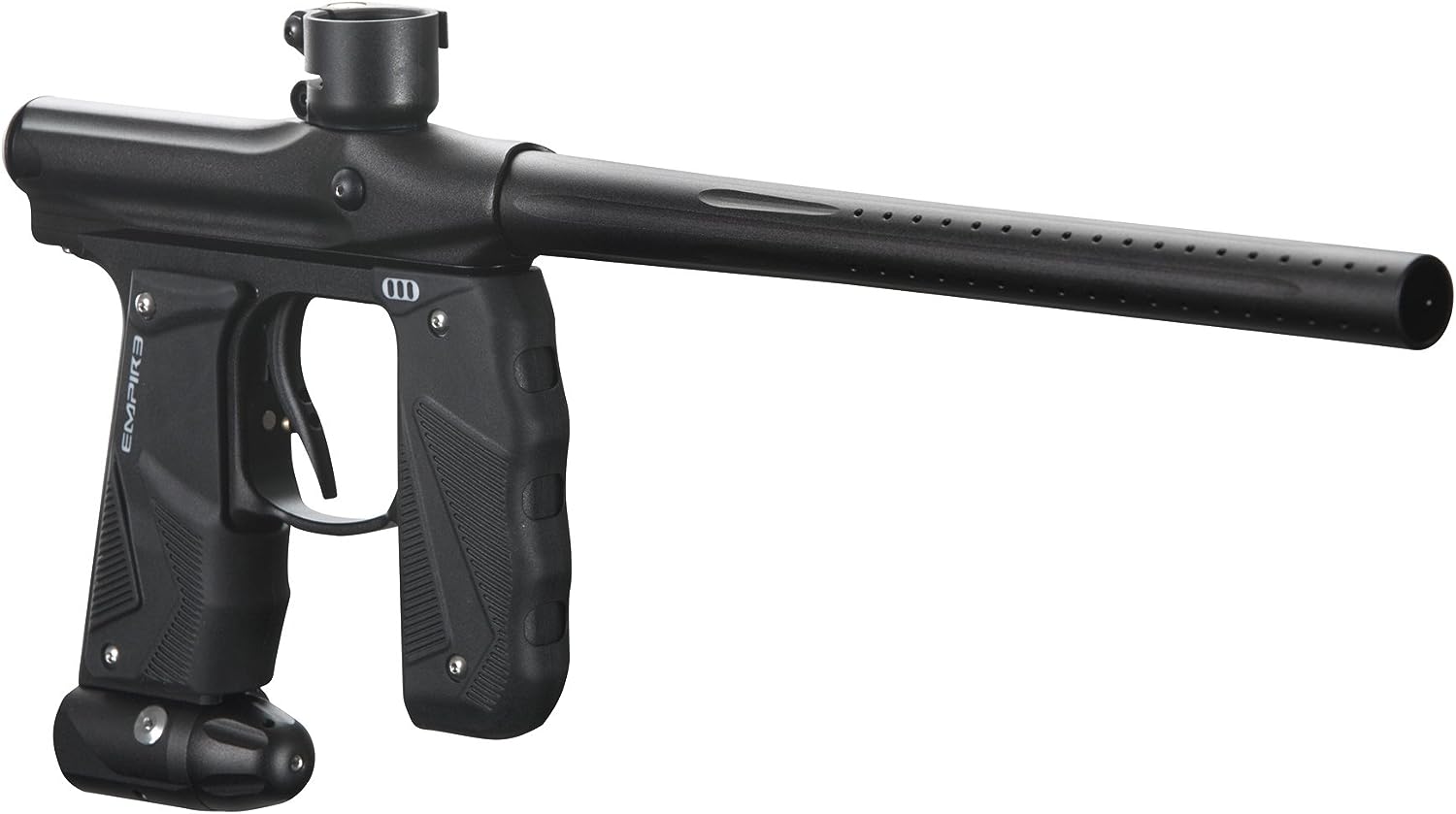 The equipment comes with a 12-inch auto cocker and a threaded barrel. While we would have appreciated a longer barrel, this one is fine for the most accurate shooting. Furthermore, it also contributes a great deal to firing pressure and distance.

Now, for the most part, the barrel is responsible for quicker and quieter shots as compared to many other markers. If you are considering stealth when on the field, then you only have the barrel to thank for the reduced noise.

Now, this is yet another improvement as it makes it easier to secure the feed neck to the hopper. The original model came with a threaded feed neck which in our and those of many people’s experience caused a myriad of problems. Some claim that it was unthreading itself, and others say that it became lose on its own. We also read from people who said that it just snapped off.

The good news is that the clamp-on feed neck now holds to the body of the gun securely and in place. Furthermore, there are also a couple of screws that hold the body in place which lowers if not eliminates the chances of it coming loose.

Now there are a couple of other excellent features that we expect Empire to hold on to and which they have is the hose-less design.

Empire has made some exceptional paintball guns over the years. It is evident that they have been on a journey of improvement and evolution towards the perfect paintball marker.

It gives us confidence that the company is willing to go back to the drawing board and redo its original gun to make it better. The Mini GS is certainly superior in terms of size, weight, and sound. At less than 2 pounds, you can hold it any position, and it is perfect for slim people, women and those with small hands.

Some people have complained that the Mini GS is way too small for them; the complaint comes from people who are big with large hands. Now for those people, the issues are obvious, and perhaps they should avoid the Mini GS.

Cleaning and maintenance of this marker can also get complicated. You cannot get away with never cleaning the gun, so it is best to start learning how to disassemble and assemble it as soon as you get it. By the time you are good and confident, it will be time for routine cleaning.